Ever since I can remember I wanted to become a nurse.

I am sure a major factor in that decision was the influence of my mother. She went back tow ork as a maternity nurse when I was 16 and worked part-time nights in a small community hospital that later became a birth center.
She enjoyed being with women in labor and birth and respected the natural process of labor. I could tell this work was important and brought my mother much satisfaction and meaning. (I have also recent discovered my great grandmother was also an attendant/midwife at most of the births in her community in Pennsylvania).
As a result when I went to college I majored in nursing and graduated with a Bachelor of Science in Nursing. The first year after graduation I worked at Goshen Hospital on a variety of units thinking I would probably choose a medical/surgical unit. Maternity nursing was my mother’s passion and I thought I would want to work in a different area. Then a position became available in the maternity department and I decided to try it. To my surprise, I loved working with mothers during labor and birth and helping them achieve a safe and satisfying birth.
I soon started teaching childbirth education classes. A couple of years later when we moved to Indianapolis for my husband to attend graduate school, I also started graduate classes graduating with a Master degree in Maternity Nursing and a certification as a Women’s Health Nurse Practitioner since IUPUI did not have a midwifery program.
I started working at Fairhaven OB-GYN in 1981 and have been providing well women care since that time. In the beginning years at Fairhaven, I also taught Maternity Nursing at Goshen College. In the early 1990’s, Nancy Loewen, a college friend and nurse-midwife, called to see if Fairhaven would be interested in hiring a nurse midwife. Fairhaven hired her to start our nurse-midwifery practice and as the practice grew I decided to go back to school to do a postgraduate course in midwifery. In 1995 I joined our midwifery practice and now we are a practice of 5 nurse-midwives.
Midwife means “with woman”. It has been an honor for me to be with many women in labor and birth at Goshen Hospital and also for the last 10 years at Goshen Birth Center.
Being a midwife means creating a sanctuary for birth and becoming a guardian of that sacred space so that women and their partners feel safe and strong in their ability to birth.
As Suzanne Arms writes:
“Giving birth and being born-These most important journeys
Shape each of us.
Deeply and forever.”
(“Being Born” by Suzanne Arms)


For more information about Julia see this Good of Goshen post from 2016. It talks about her other passion, serving as a city council woman.http://goodofgoshen.com/project/promoting-health-in-all-its-forms/

March 14, 2019
Lauren is the newest member of the midwife team here at the birth center. She is a recent graduate of the school of nurse midwifery at Frontier Nursing University.  In her spare time, Lauren enjoys spending time with family and friends, being outdoors, international travel, playing piano, Latin dancing, and being a member of St. Joseph County Right to Life.

Why midwifery?This is often asked when I share with others what I have been pursuing the past few years.  I suppose the answer is summed up as this: When you feel a calling deep within your soul, you cannot always explain or understand why, but because you are known by a God who knows your heart’s deepest dreams and desires, you respond and trust. As I reflect on my desires as a child, I never imagined this journey of life would bring me to such a sacred place of caring for new families and being the first to hold a precious new life in my hands. I distinctly remember as a young girl, learning about the immense poverty that was so p…
Post a Comment
Read more

December 08, 2017
I took a very circuitous route to becoming a midwife.  When I first went to college I didn’t have a strong pull toward any profession, but I did like to do art, so that became my major.  At one point, my grandfather pulled me aside and said, “Your grandmother was a teacher, your mother was a teacher and you should be a teacher, too.”  I know he meant well, but as a typical teen, I didn’t really like to follow unsolicited advice, so not only did I stick with art, I made sure not to become an art teacher.
Fast forward to several years after graduation.  I was pregnant and knew the people to see when pregnant were midwives.  I sought out a group of midwives and saw them for my prenatal care.  At one point they asked if I planned to take a birth class, and steered me toward Bradley classes.  Within minutes of the start of the first class, I knew it was the right class for me, and I thought maybe someday I should teach it.  So when my daughter was 2 years old, I became a Bradley Method …
Post a Comment
Read more
February 25, 2019
When The Midwife Gives Birth…
When a midwife is pregnant she gets lots of questions about her own preferences surrounding her own pregnancy and birth.


Morgan De Kleine CNM, a midwife at Fairhaven OBGYN graciously answered some of those questions for us to share with you.
Which midwife did deliver your baby?
Our son was delivered by Anne, under the supervision of Beverly. They both did a great job taking care of us, and we were happy that we got two midwives for the price of one! Sara and Julia were working at Fairhaven that day, so they came by to visit us at the end of their office day. We also had a wonderful team of nurses caring for us. Diana assisted during our birth, and Charlene cared for us after the birth. Elizabeth and Charlene did our home visits at 24 and 48 hours after the birth.
What is your birth story? This is the short version! I woke up at 3:30 am with contractions. Within an hour, they were 2-3 minutes apart, and I was working hard to breathe through …
Post a Comment
Read more 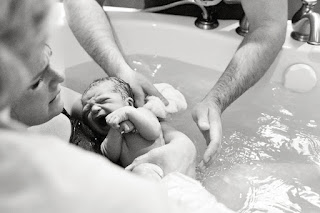